The Effect of Violence on Children. 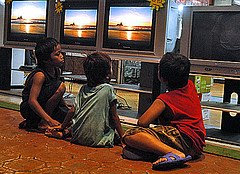 If you want to prove something, you have to use the

scientific method, right? Observe something that you want

to measure, and then measure it.

If there is any doubt in your mind, just spend a little time applying the scientific method – observe them.

As we start this discussion, it's helpful to understand a little about child psychology.

During their earlier years, children are trying to understand their role in life by framing

it within what they observe in everyday life.

It stands to reason that if you feed your child a steady diet of bacon for every meal,

it's only a matter of time before the kid looks like a pig.

You are what you eat, as the saying goes.

If children have a steady diet of violence, it's only natural for them to experiment with

it as it relates to what they do every day.

to stuff their faces with, you are kidding yourself.

Here are some examples:

and TV – Now in higher-than-ever definition.

That's right, all the violent detail you could ever want, accessible from anytime, or

Most recently my youngest son, Alexander, got a hold of the remote control and found

his way to the Mighty Morphin Power Rangers television show.

If you are not familiar with the Power Rangers, It's one of those

Alexander is two. At that young age, children copy what they see, and they test

boundaries. If you are a parent, you know this.

What do you think Alexander did? He got something he could use as a cape, and

hopped through the house, pausing occasionally to pose in a martial arts stance.

Then, he would find his nearest sibling, and practice a punch or a kick he had seen

on the TV show, complete with sound bites from the program.

He was acting out what he saw glorified on TV. The Teenage Mutant Ninja Turtles

seem to have the same effect on him.

have today. The technology behind them now is extremely advanced, and made to

impact our senses to extreme degrees.

Trends in content seem to be advancing almost as fast as the technology displaying it.

It's more acceptable now than ever to show extreme content at all hours of the day.

Hack and slash movies are making a comeback.

Just look at movies like Saw or Hostle. These shows are out of control and

are the perfect example of gratuitous film making that marks our day and age.

It's well known at this point that violent situations cause a chemical reaction in humans.

This reaction is called fight or flight. We must act now.

We are surrounded by violence in every form of media. It's up to us now to either

fight, or run. As adults we have to protect our children.

find other avenues to fight the trend of violence.

out on your children.

JUSTIN SWAPP is from Ogden USA. He maintains a Writing and Literature blog - Finish Writing and a business blog - Swappratices.

In his blog, he provides invaluable articles about techniques and styles in writing and encourages aspiring writers to give out their best.

This is what he has to say for himself.

"I am a 32 year old with a BS in Business Marketing, and an MBA. Don’t let that fool you, however. I have always loved writing, and storytelling. I feel that reading and writing is extremely important, and I want to share what I can with those who find what I have to say useful. Write on, regardless of what they say. Write on."

Such inspiring words from a knowledgeable blogger. Thanks, Justin for accepting my invitation.

This is another great post for this campaign. Justin was able to give us some real scenarios as to how violence on TV or movies can have negative impact on our children.

Thanks Tasha for that invaluable comment. I appreciate it a lot. I'm sure Justin will post his reaction when he comes to read this.

Wonderful post with solid information, and relating content. It always amazes me how the level of violence on TV has increased. Unfortunately people do not believe there is a connection between that and our rising crime rate.

Parents would be better advised to let their children become involved with vexillology as a more studious pastime.

That was expertly used huh!, Thanks for the visit. I appreciate it a lot.

and you're right in your observations Eric. All the best.

Just found your blog, hope you don't mind if I stick around for awhile ...
Linked to your post from Mainstream Media - Normalizing Sin

Pardon me for playing the devil's advocate here, but there are a few things that concern me about the anti-TV violence movement.

First, I believe there is a fine line between parents doing their best to keep their children safe, and passing the buck to somebody else. Who is really responsible for what a child watches, the networks, or the parents?

Second, there is the pontential for inconsistancy. For instance, how many parents don't let their kids watch martial arts shows, but let them learn in Sunday School about God slaying the first-born children of the Egyptians? I'll grant that children should not be exposed to either too soon, but if they're old enough to handle grisly Bible stories, they're old enough to handle some TV violence.
Also, nowadays people complain that TV and video games are rotting kids' brains, but the same complaint used to be sounded against "romances, novels, and plays". (http://books.google.com/books?id=B_TU6NytoFoC&pg=PA47&lpg=PA47&dq=%22romances,+novels,+and+plays%22&source=web&ots=HnxsaOIKJB&sig=vKwYOfucuK-rzW86sDXRfgVYda8&hl=en&sa=X&oi=book_result&resnum=2&ct=result#PPA47,M1)

So I think its a little hypocritical for a parent to say, "Junior, don't be watching that violent garbage, do your report on 'Macbeth'."

Like I said before, I don't believe children should be exposed to too much too soon, but I believe it is primarily the job of parents to control the remote, not goverment to control what is broadcast.

I agree with your ideas , but you see being a community of people means there should be a concerted effort from everyone concerned to solve the problem. The parents foremost, the school, the community itself and the government.

Nothing succeeds unless all sectors cooperate in solving the problem.

Take for example the problem of pirated movies. Do we say, it's not our problem, it's the producers 'problem, they should be on guard and keep their copies under lock and key. We won't bother because we don't even earn from it. They alone are responsible in curbing piracy.

But of course, this is not the case, everyone has to step in and give his fair share to curb piracy.

Even buyers should cooperate and buy the original CDs instead of the pirated ones.(Even if it means spending more.)

I once had monitored a certain group, and after the activity, someone lost her wallet. I had to gather them up and asked them to help in the search.

One of them said, " It's her responsibility not to just let her purse lying around."

Well, well, well, is this the kind of principle or values we want our children/youth to learn?

If honesty would have been taught, and the respect for other's property were the focus then, no matter where the purse was, it would always find its way back to the owner, because children would have learned that getting what is not your own is bad.

Saying that parents are responsible alone in controlling the TV viewing of their children is tantamount to saying, there are no other factors that affect the activity.

Government stepped in to warn people about smoking, alcohol, pre-martial sex, piracy etc, wouldn't it be logical and responsible for them to do something about TV violence in a supposedly for "general patronage "program?

Isn't it their moral responsibility to see to it that children are protected?

We must remember that the future of the country and of the world are upon the children.

Please read more of the articles in this blog and open your mind.

Thanks for reading and for commenting. I appreciate it a lot.

I'm glad you agree that its the parents' responisbility first and foremost to monitor their children. I should have mentioned that I do support certain regulations with regard to media content (i.e. no-one under 17 admitted to R movies without a parent). I just believe that any movement can be taken to extremes, and that it is the responsibility of movement leaders to stand against extremists from both sides of the fence.

It's good you understood my point of view, and I do hope I got your support. Thanks for the visit.