Hi Jena. I was thinking of writing a full article about this for you, but I can probably distill my opinion in a comment.

Twenty-odd years ago, I did a degree in Media Studies. The debate about whether and how children were affected by TV violence was in full swing then. But academics could not get evidence to come down hard on one side or the other. I found it incredible that anyone could believe it wouldn't affect children, but they all had to do their research and find the evidence. For me, it was just common sense. 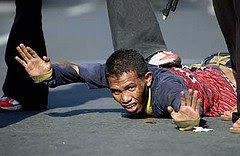 Since then, in the UK, violence and gang culture among teenagers and young people has escalated to the point where many are carrying knives and guns. The amount of violence we see on TV and in other media has also developed so much that we tend to expect it.

So where did our youngsters' ideas come from? It seems blindingly obvious to me.

Even seeing their exploits on TV or in the newspapers often doesn't evoke shame, but rather pride among their peer group. The minority of young people this applies to seems to be growing and spreading, and the media clearly plays a large role in this.

Sadly, our values are changing. Without much thought, our society seems to have accepted, even embraced, the idea that violence is ok in what we read, see and hear in the media.

Voices raised against haven't made much headway, but that doesn't mean they should give up. I'm not suggesting that we should completely eradicate violence from the media, but that we should not sensationalise it, and we should compensate with more positive images. We need to strike the right balance to teach our children that two wrongs don't make a right.

At the moment, even parents who carefully monitor what their children are exposed to at home can't protect them from violent make-believe games that are thought up in the school playground by other children. Once she went to school, I soon found my little granddaughter playing games in which she 'killed' all her soft toys .

Thank you for choosing me, Jena, and for posting my comment.

You have a well thought of comment. Thanks for contributing. Happy blogging.

Hello, I think this post is valuable message which deserves to be spread in internet. Thanks jakil, thanks jena...